In light of black history month, I felt it necessary to pay homage to all of the men and women that came before us. As well as remind us to keep in mind what these people created during challenging times. It’s impossible for me to write about all, but I would be remiss if I didn’t write anything.

We usually always hear of such leaders as Rosa Parks, Martin Luther King Jr., and Nelson Mandela. But one day at work, my students were learning about Ruby Bridges. And immediately I felt the need to write a little about her. She was a young girl from the south, who excelled in her class. She was then offered an opportunity to go to an all white school, when schools during that time were segregated. Her father wasn’t sold on the idea, but her mother knew that it would be a great opportunity for her daughter to receive a great education.

As the first African American girl to go to an all white school, the transition was more difficult than they had anticipated. From Ruby being looked down on, called horrible names, parents of the white children pulling them out of school to be away from Her, and even having her life threatened. No matter how hard the situation was, Ruby was still in school every morning. This very challenging time brought about great change in America. This was the beginning of something great. This took great persistence. Although it was her parents decision for Ruby to go to this school, it took great persistence to keep going having to endure all of this. Her parents could have seen what it was doing to her and decided to take her out of the school, but they didn’t. Ruby could have completely shut down, not wanting to reach out to those at school when the other children returned, but she didn’t. One night Ruby walked into her mothers room crying telling her that she was scared. Her mothers response was, go pray. And she did just that. Every morning Ruby prayed for those people who treated her terribly. They continued anyway until it was no longer out of the norm for black and white people to be together.

Along with Ruby and her family, there are many others who created change and such a movement. So we thank them for what they had to endure in order to pave the way and make things better for those behind them.

Now how do we celebrate what these people have done on our behalf? We walk in their footsteps. We take what they have done and relate it to our lives. We take what we’ve been given and use it to create a movement just as huge as theirs. We have a responsibility to carry out their legacy. All that they’ve done was not done in vain. When things become difficult, we consider all those that have gone before us and keep moving. Allow those people to be inspiration and motivation to keep striving for better. Keep praying and believing God. If they could do it during those times, we too can create the change we want to see.

Often times we wonder what it’ll take to get from one point to another. We fail to realize how simple it is. All it really takes is a single moment. All it takes is now, the time that we’ve been given. We’re sometimes so stuck in concerning ourselves with what took place in the past, therefore causing us to doubt positivity or success for the future. We have to learn to take advantage of now. Learn to live in the moment, realizing what we do now has the power to change yesterday as well as tomorrow.

There was a time in my life where I was literally stuck. No movement, no progression. This was a result of the fact that I wasn’t taking advantage of the moment I was given. Somewhere in my mind I had an idea of where I wanted to go, but because I focused so much on the past and failed attempts, I wasn’t sure how I’d get there.

We may not have done everything right in the past. However, if we continue to focus our attention on how wrong we were, it’s possible that it’ll negatively effect what we do in the present or lack thereof. We miss out on opportunities when we are not taking full advantage of the moment.

We can’t be concerned with what people say or what we see around us. If we do, it’ll cause us to miss the moment. Miss the opportunity that was placed in front of us.

I’m currently without a laptop or computer. My laptop crashed twice and I lost a good amount of writing. I now do the majority of my writing from my phone. And I’ve been to the place where I thought to myself “I’m over this. I have to wait until I get a laptop to finish working on my writing.” But I realized I can’t think that way. Had I not taken advantage of my iPhone and began to share my work, I’d miss out on the opportunities that are coming and going to continue to come my way. Not only would I miss my opportunity to move forward, I’d also miss the opportunity to reach, encourage, and inspire others.

So I encourage you to take full advantage of “the now.” Live in the moment. Don’t allow circumstances, people, or situations to cause you to miss out on an opportunity that will further your success! 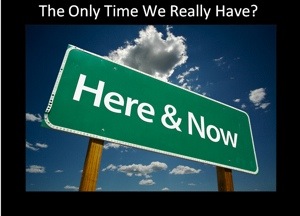