It’s often heard of when people either try to be someone or something they are not, or hide who they really are. There are a myriad of reasons that we do this. Whether it be to please other people, make ourselves look good, because we don’t like who we are, or because we’re afraid of what others may think. As some of you may be, I’m guilty of hiding who I was on several occasions. As I’ve shared, there have been times where I wasn’t comfortable with who I was, and was afraid of what others would think. Whatever reason we choose to downplay who we really are, will eventually or immediately result in unhappiness.

I’m pretty open about the insecurities I’ve dealt with in the past. I’m also open in sharing that some of my insecurities still creep up from time to time if I don’t check it. As I’ve become comfortable with who I am, I still get nervous in certain settings, I still look at the way certain people do things. It’s natural, all apart of life. But it’s up to us to allow those thoughts and feelings to pass.

Writing has become a passion for me. However, there was a time that I compared my writing to others. I’ve contributed and guest blogged for several online publications, but there was still this fear that my writing wasn’t good enough. There was one publication in particular that asked me to write for them. I gladly said yes, but I became nervous. I knew how intelligent this person was and how eloquently this person spoke. And I said to myself, it’s very rare that I use big fancy words (not that I don’t know any lol) in my writing or have these amazing parables or analogies. I was later reminded through thought, of the messages I’d received from those who were touched by my simple blog posts and articles. I was reaching people, and they were encouraged. I could’ve been pushed to unhappiness by racking my brain with other people’s writing styles. I could’ve tried to be like other people and imitated their style. But that isn’t who I am. And I wouldn’t be happy if I went down that path. I’m comfortable with my simple writing because I know, even if it’s one person, it’s reaching someone.

For those who may not know, I’m a very silly person. I like to laugh, have fun and an all around good time. But with my track record, of course I wondered whether people would think I’m this or that, or too much. But I’ve learned to be just as silly as I want to be, because it’s who I am. Although I am a good amount of the time, I don’t always want to be serious. There are times that call for that, but there has to be a balance. Which is the only way to happiness. I truly believe having a sense of humor brings joy into the lives of others. And I’m always glad to do that.

This weekend I was asked to do a task that was out of my comfort zone. Not a big deal to some, but it was for me. It’s easy to think about how others do what you are asked to do so you can maybe take something from them. The first thing I heard was, “be yourself and you’ll be fine. No one’s asking you to be someone else.” Then another person said, “you’ll be fine, just be yourself.” I completed the task, nervous and all. During the process, I was only myself. And became a little more comfortable as I went along. That evening I received a message that said, “never be afraid to be who you are.” This help me to further realize that I don’t have to be afraid, I just have to be myself. In order to do what I’ve been called to do, I just have to be who God created me to be.

It’s not only exhausting to try to hide who you are and/or be someone else; it leads to unhappiness, it doesn’t allow the true greatness that’s inside of you to be shown, and it won’t help you to grow. At the end of the day, the right people will be placed in your life; that’ll accept you for who you are and be willing to go through your growing process with you. So I encourage you to try to forget about what others may think or what others are doing. Be who you are, and always stay true to yourself. It’s the only way you’ll be able to flourish and walk happily in the manifestation of your calling. 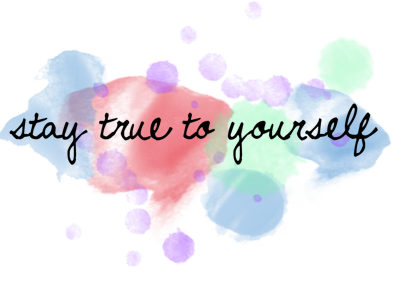